Snag1:
I was on Hardy (not Intrepid) and Hardy repositories do not have a needed utility makedumpfile. After a few hours of compiling, the build failed as it couldn't find makedumpfile. You can save yourself the trouble and manually install the package from here. Once you download the makedumpfile package, you can install it like so:

So I'm now starting a build again, but this time, to save some time, I will build just the generic flavor, like so:

I'm also removing the source directory and cloning the repository fresh. This is to
make sure that there are no conflicts with any files left over from the previous
build.

Day 2:
So today I got the build to go all the way. It generated two debs - the linux image
and headers respectively. I installed the image like so:

Since I had modified the /boot/grub/menu.1st file, this gave me the option of overwriting
it or keeping the old. I kept the old file as there were entries to all my
kernel versions I wanted to keep. Later I manually added the stanza
for the new kernel to /boot/grub/menu.1st like so:

Snag 2:
Then I tried installing the headers like so:

But this failed as there was a dependency on linux-headers-2.6.28-4 which was not
present on the system. I found it here. I installed it like so:

After that, I could successfully install the headers.

After which, I could reboot into the new kernel.

However my wireless connection did not work. Looking at the dmesg output I found these:

So I created the firmware directory for the acx driver under the directory for
the new kernel and copied just the single file mentioned by the dmesg to that
location, like so:

After this, I could reboot into the new kernel and the wireless worked.
Posted by thushara at 10:33 AM No comments:

Java has no unsigned types 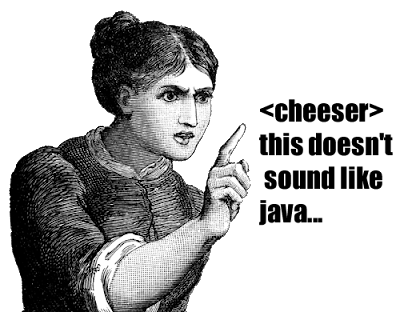 I came across this today as I need to create a hash that maps a tuple to an object. The tuple comprises of two keys. Each key is in reality an unsigned integer (32 bit). I was hoping to construct a key for the hash by shifting one key 32 bits and ORing them together to make a 64bit key.

A good article on this can be found here.

The problem with not being able to use an unsigned type supported by the language is the introduction of subtle bugs.

So how about this? (We're using longs now)

So if you want to work with unsigned 32-bit values in java, always work in long data type and convert any literal to long with an L at the end.
Posted by thushara at 11:55 AM No comments: