I was tracking down a slow indexing process and got this callstack with YourKit: 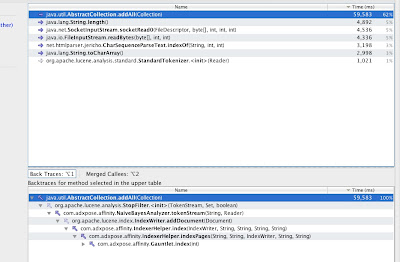 There is a Collection.addAll() being called for each invocation of tokenStream() which is called many times per document. The StopFilter is the culprit. When I checked the constructor, it looks like this:

As you can see, if the stopWords set is not of type org.apache.lucene.analysis.CharArraySet, a whole copy is made. I was using a regular Set
Posted by thushara at 9:37 PM No comments: