Pieces of code can be timed within the Jupyter notebook using the %timeit magic.

Here is an example where a grid walk algorithm is implemented three times with progressively better run time, timed with %timeit and graphed using bokeh: 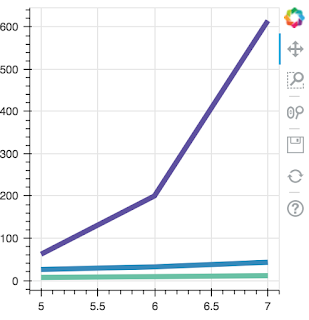 Code for the plot:


This shows how the algorithm with exponential time complexity deteriorates for higher values of n: 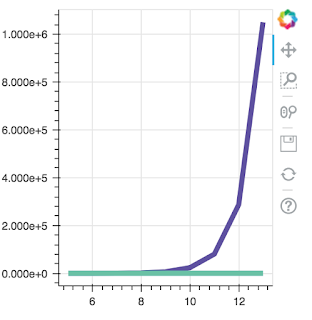 Now that I've shown you a bunch of performance numbers and visualization, if you are curious about the algorithm, it is a contrived example of finding the number of paths from one corner of a grid to another, here the squares to the north of the diagonal from top right to bottom left are out of bounds - that is, the path is restricted to the right of the diagonal. In this image, we show the problem for n = 5. 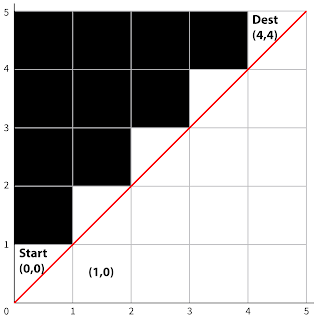 The next improvement is to remember the number of paths once calculated. Say if we are on [4,2], we will calculate the path to the grid end from here and mark it in M[4][2]. Next time we are at [4,2], we no longer need to calculate again, as the result can be looked up from M[4][2].

The last algorithm uses dynamic programming to do even less work. It works based on the simple observation that a cell (i,j) can only be reached from just 2 cells. Those are the cell to its immediate left, (i,j-1) and the cell right below it, (i+1,j). Then there is just a single path from these two to (i,j). So if we know the number of paths to those two cells, we can add them up to find the number of paths to (i,j). Then we can keep calculating the paths to each cell, walking from bottom row up, going right on the columns and eventually, we will fill the cell at the top right (0, n -1).